The processor, also known as the CPU, provides the instructions and processing power the computer needs to do its work. The more powerful and updated your processor, the faster your computer can complete its tasks.

Processors are used in PCs as well as they can be used into other electronic devices such as smart phones, tablets, PDA, and more. Intel and AMD are main companies, which are produced best quality processors in the market.

Here are the important characteristics of processors:

The primary defining characteristic of a processor is its make AMD or Intel and its model. Although competing models from the two companies have similar features and performance, you cannot install an AMD processor in an Intel-compatible motherboard or vice versa. 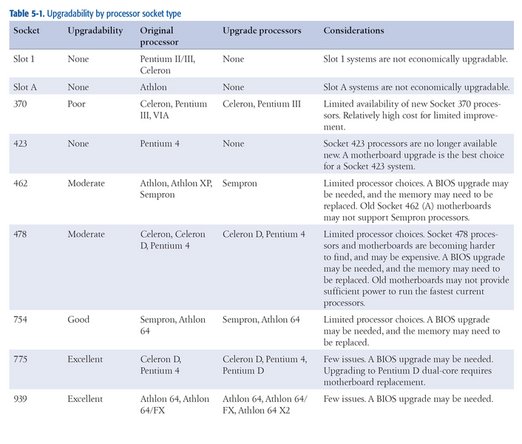 The clock speed of a processor, which is specified in megahertz (MHz) or gigahertz (GHz), determines its performance, but clock speeds are meaningless across processor lines. For example, a 3.2 GHz Prescott-core Pentium 4 is about 6.7% faster than a 3.0 GHz Prescott-core Pentium 4, as the relative clock speeds would suggest. However, a 3.0 GHz Celeron processor is slower than a 2.8 GHz Pentium 4, primarily because the Celeron has a smaller L2 cache and uses a slower host-bus speed. Similarly, when the Pentium 4 was introduced at 1.3 GHz, its performance was actually lower than that of the 1 GHz Pentium III processor that it was intended to replace. That was true because the Pentium 4 architecture is less efficient clock-for-clock than the earlier Pentium III architecture.

Clock speed is useless for comparing AMD and Intel processors. AMD processors run at much lower clock speeds than Intel processors, but do about 50% more work per clock tick. Broadly speaking, an AMD Athlon 64 running at 2.0 GHz has about the same overall performance as an Intel Pentium 4 running at 3.0 GHz.

The host-bus speed, also called the front-side bus speed, FSB speed, or simply FSB, specifies the data transfer rate between the processor and the chipset. A faster host-bus speed contributes to higher processor performance, even for processors running at the same clock speed. AMD and Intel implement the path between memory and cache differently, but essentially FSB is a number that reflects the maximum possible quantity of data block transfers per second. Given an actual host-bus clock rate of 100 MHz, if data can be transferred four times per clock cycle (thus “quad-pumped”), the effective FSB speed is 400 MHz.

Processors use two types of cache memory to improve performance by buffering transfers between the processor and relatively slow main memory. The size of Layer 1 cache (L1 cache, also called Level 1 cache), is a feature of the processor architecture that cannot be changed without redesigning the processor. Layer 2 cache (Level 2 cache or L2 cache), though, is external to the processor core, which means that processor makers can produce the same processor with different L2 cache sizes. For example, various models of Pentium 4 processors are available with 512 KB, 1 MB, or 2 MB of L2 cache, and various AMD Sempron models are available with 128 KB, 256 KB, or 512 KB of L2 cache.

Process size matters because, all other things being equal, a processor that uses a smaller process size can run faster, use lower voltage, consume less power, and produce less heat. Processors available at any given time often use different fab sizes. For example, at one time Intel sold Pentium 4 processors that used the 180, 130, and 90 nm process sizes, and AMD has simultaneously sold Athlon processors that used the 250, 180, and 130 nm fab sizes. When you choose an upgrade processor, give preference to a processor with a smaller fab size.

Different processor models support different feature sets, some of which may be important to you and others of no concern. Here are five potentially important features that are available with some, but not all, current processors. All of these features are supported by recent versions of Windows and Linux:

SSE3 (Streaming Single-Instruction-Multiple-Data (SIMD) Extensions 3), developed by Intel and now available on most Intel processors and some AMD processors, is an extended instruction set designed to expedite processing of certain types of data commonly encountered in video processing and other multimedia applications. An application that supports SSE3 can run from 10% or 15% to 100% faster on a processor that also supports SSE3 than on one that does not.

Until recently, PC processors all operated with 32-bit internal data paths. In 2004, AMD introduced 64-bit support with their Athlon 64 processors. Officially, AMD calls this feature x86-64, but most people call it AMD64. Critically, AMD64 processors are backward-compatible with 32-bit software, and run that software as efficiently as they run 64-bit software. Intel, who had been championing their own 64-bit architecture, which had only limited 32-bit compatibility, was forced to introduce its own version of x86-64, which it calls EM64T (Extended Memory 64-bit Technology). For now, 64-bit support is unimportant for most people. Microsoft offers a 64-bit version of Windows XP, and most Linux distributions support 64-bit processors, but until 64-bit applications become more common there is little real-world benefit to running a 64-bit processor on a desktop computer. That may change when Microsoft (finally) ships Windows Vista, which will take advantage of 64-bit support, and is likely to spawn many 64-bit applications.

With the Athlon 64, AMD introduced the NX (No eXecute) technology, and Intel soon followed with its XDB (eXecute Disable Bit) technology. NX and XDB serve the same purpose, allowing the processor to determine which memory address ranges are executable and which are non-executable. If code, such as a buffer-over-run exploit, attempts to run in non-executable memory space, the processor returns an error to the operating system. NX and XDB have great potential to reduce the damage caused by viruses, worms, Trojans, and similar exploits, but require an operating system that supports protected execution, such as Windows XP with Service Pack 2.

By 2005, AMD and Intel were both reaching the practical limits of what was possible with a single processor core. The obvious solution was to put two processor cores in one processor package. Again, AMD led the way with its elegant Athlon 64 X2 series processors, which feature two tightly integrated Athlon 64 cores on one chip. Once again forced to play catch-up, Intel gritted its teeth and slapped together a dual-core processor that it calls Pentium D. The engineered AMD solution has several benefits, including high performance and compatibility with nearly any older Socket 939 motherboard. The slapdash Intel solution, which basically amounted to sticking two Pentium 4 cores on one chip without integrating them, resulted in two compromises. First, Intel dual-core processors are not backward-compatible with earlier motherboards, and so require a new chipset and a new series of motherboards. Second, because Intel more or less simply glued two of their existing cores onto one processor package, power consumption and heat production are extremely high, which means that Intel had to reduce the clock speed of Pentium D processors relative to the fastest single-core Pentium 4 models.

You can think of the processor core name as being similar to a major version number of a software program. Just as software companies frequently release minor updates without changing the major version number, AMD and Intel frequently make minor updates to their cores without changing the core name. These minor changes are called core steppings. It’s important to understand the basics of core names, because the core a processor uses may determine its backward compatibility with your motherboard. Steppings are usually less significant, although they’re also worth paying attention to. For example, a particular core may be available in B2 and C0 steppings. The later C0 stepping may have bug fixes, run cooler, or provide other benefits relative to the earlier stepping. Core stepping is also critical if you install a second processor on a dual-processor motherboard. (That is, a motherboard with two processor sockets, as opposed to a dual-core processor on a single-socket motherboard.) Never, ever mix cores or steppings on a dual processor motherboard that way lies madness (or perhaps just disaster).

You can enhance Speed of Processor

The processor’s speed is totally depending on the ability of your CPU. You can boost up the speed of processor as well as increase the processor functionality. If, your CPU is getting unlocked then you are capable to over clock, its means you can increase the frequency of your CPU instead of its standard specifications.

Here, we will discuss about different types of CPU (Processors), which are used in computers.

If you know how many types of CPU (Processors) are there, then short answer is 5 types of processor.

Single Core CPUs were used in the traditional type of computers. Those CPUs were able to perform one operation at once, so they were not comfortable to multi tasking system. These CPUs got degrade the entire performance of computer system while running multiple programs at same time duration.

In Single Core CPU, FIFO (First Come First Serve) model is used, it means that couple of operations goes to CPU for processing according to priority base, and left operations get wait until first operation completed.

Dual core processor contains two processors, and they are linked with each other like as single IC (Integrated circuit). Every processor consist its own local cache and controller, so they are able to perform different difficult operations in quickly than single core CPU.

There are some examples which are used as dual core processors such as Intel Core Duo, the AMD X2, and the dual-core PowerPC G5.

Multi core processor is designed with using of various processing units means “Cores” on one chip, and every core of processor is able to perform their all tasks. For example, if you are doing multiple activities at a same time like as using WhatsApp and playing games then one core handles WhatsApp activities and other core manage to another works such as game.

Quad core processor is high power CPU, in which four different processors cores are combined into one processor. Every processor is capable to execute and process all instructions own level without taking support to other left processor cores. Quad core processors are able to execute massive instructions at a time without getting waiting pools. Quad core CPU help to enhance the processing power of computer system, but it performance depend on their using computing components.

Octa core processor is designed with using of multiprocessor architecture, and its design produces the higher processing speed. Octa core processor has best ability to perform multi tasking and to boost up efficiency of your CPU. These types of processors are mostly used in your smart phones.

HOW TO EASILY REACH THOUSANDS OF FACEBOOK USERS WITHOUT PAYING.